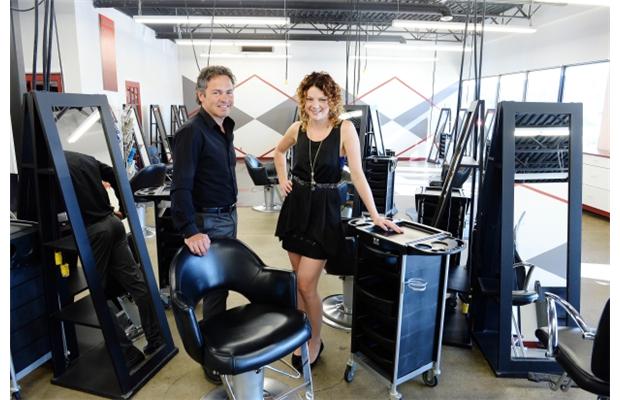 Candyce Fiessel and Dan Pritchard have long been key players in Saskatchewan’s rapidly growing beauty industry. For years, they have nurtured others who have made style their career choice.

And now, the dynamic duo are taking it a step further by taking over the reins at a popular local beauty college.

At 61, Debra Forsberg, longtime owner of Richards Beauty and

Esthetics College in Regina, has decided to retire.

“I enjoyed the passion of it all,” she said. “I have always worked hard-core.”

So selling the school she worked at for almost three decades, and owned for almost two, was not something Forsberg took lightly. There were opportunities to sell in the past.

“I have had a lot of people approach me,” she said.

But Forsberg was holding out for just the right fit. new owners who shared her vision and passion.

Fiessel and Pritchard first approached Forsberg several years ago, expressing interest in taking over the beauty school. But it wasn’t until this summer that the change of ownership became reality.

“The timing was right this time for me,” Forsberg said. “Dan brings so much wisdom from working behind the chair. And Candyce is a high-energy, talented, young woman.”

Pritchard, 51, has been working in the beauty industry since he was a teenager.

“I started when I was 16. I started with Mario in the Regina Inn,” he said.

In addition to working behind the chair, Pritchard has been an educator, sharing his expertise with other hairdressers during his years as a platform artist.

“He was my mentor and teacher,” the 29-year-old Fiessel said. It’s a family affair. Pritchard is Fiessel’s uncle. He shared his passion for the beauty industry not only with his niece, but also his son, Christopher, who is his partner at a salon in Harbor Landing. And Pritchard’s wife and Fiessel’s mother. who are sisters. are also involved, handling the accounting side of the business.

“My biggest passion is growing people,” Pritchard said. “Setting people up to succeed.” Fiessel echoed that sentiment. “The education part of it is just a passion. I wanted to be able to help grow young people into this industry successfully … to really help them set goals and strive towards growing to the next level.”

Another goal is to change the status quo of being a hairdresser, Pritchard said.

“We want to change the mentality of being ‘just a hairdresser.'” Hairdressers are entrepreneurs, educators, communicators and leaders, as well as stylists, he emphasized.

“There is so much involved in being a hairdresser. They can be very successful career people.”

His advice to young hairdressers? “Don’t undersell yourself !” Promoting the province’s beauty industry is something Pritchard and Fiessel take every opportunity to do. Both have been involved in the production of Saskatchewan Fashion Week, encouraging local talent and showcasing the province’s creativity.

Taking over the beauty college will allow them to expand their influence, they agreed.

“It’s exciting to dive back into educating on a weekly basis,” Pritchard said.

The school’s teaching instructors and curriculum will remain the same. As far as its location, Fiessel smiled and said, “We’re looking forward to outgrowing the current location!” “I hope we build our school into a model, a first in Saskatchewan,” Pritchard said.

“The biggest compliment would be to have salon owners waiting for our graduates to hire them,” Fiessel said.

“Just to see our students become successful based on the tools that we gave them, not by luck or by chance,” Pritchard added.

They’re up for the challenge, Fiessel and Pritchard agreed.

“We’re passionate about this.”

Want to join the discussion?
Feel free to contribute!